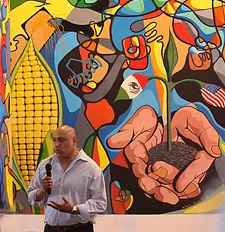 Born in 1969, in Mexico City. I have intruded in the art in a lyrical and incidental way when he was a little boy, in the year of 1974, working with drawings. As a young boy he received direct artistic influence from his father who was a Landscaping painter at that time. Jorge considered art as a part of himself during his childhood and adolescence. Later on he perfected his technique by taking drawing classes, painting, history of the art, human body drawing, art object, engraving, mixed media and abstraction. I have decided to pursue a career in “Drawing and Illustration and Fine Arts” at the Superior School of Art and Advertising Drawing, in Mexico City. Some years later, he decided to move to Atlanta, Georgia where he focuses on Abstract Art, figurative forms, and murals as well. In each new work, Jorge looks out from within as he explores issues of outer and inner development. Jorge had the opportunity in 2005 to work with kids from Elementary, High School and College, in a project organized by Oxford College, in Covington, Georgia, named “Fiesta del color”, where Mr. Arcos shared knowledge to the young guys, where they learned techniques of how to apply color and make a composition for a painting. Later, High School kids made a mural in their school applying that they learned. In 2006, Mr. Arcos worked in a project with other artists like Ernesto Cuevas, Waldo Vinces and Roberta Griffin, in the City Hall East, Atlanta. It was a mural painting on paper, where they showed their Hispanic roots. Recently, in April, 2014, Jorge Arcos was commissioned from Westminster Schools to make a huge mural in a Latino Mall called Plaza Fiesta. Jorge painted a colorful abstract and figurative mural, where he integrated Mexican icons about its beautiful past, and present and future of Hispanic community in the United States.

Mr. Jorge has had several art exhibitions in some countries, such as Germany, Portugal, Spain and United States, with private and corporative collections around the world.

Currently his work is focused on abstract painting, with different mediums such as acrylic, oil and mixed media, on wood and canvas, also working with this great medium called encaustic.