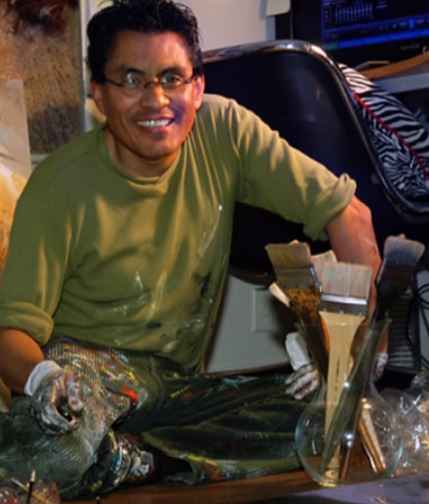 An international artist, Pedro Fuertes Bolanos was born in Lima, Peru, February 22, 1958 in Jesus Maria, Lima, and grew up in the district of El Agustino, Lima . He studied in the College of Jose Carlos Mariategui.

To defray the costs of his studies, Mr. Fuertes sold his artwork to tourists. Against the opposition of his family, he entered the Escuela de Bellas Artes of Peru in 1976, and by the end of that year, he had formed the group EMBA with which he performed in the municipality of Huanuco. At the end of three years he left the school, but not the practice of painting itself, partly for economic reasons, but also because of severe poisoning produced by involuntarily inhaling acids from the paints utilized for his artwork. During this period, Mr. Fuertes taught art in the college where he had studied, founded an academy of drawing and painting, and painted portraits of important people in politics. Two years later, he decided to return to school, studying successively with the masters Carlos Aitor Castillo Alberto Davila and Miguel Nieri. During his sojourn there, he followed the official curriculum, but, at the same time, he looked for his own form of expression which he called Abstract Surrealism.

The necessity of abstracting without, at the same time, abandoning shapes entirely, has caused the master, Fuertes, to capture distinct harmonies from numerous relationships, developing them according to a new logic, conveying them to a new, unique level of their own.

In 1985 he came away from the Servulo Gutierrez art show with an Honorable Mention, being recognized as one of the best students in the show. He received his award in the specialty areas of Drawing, Painting, Teacher Training and Graphic Design.

A lifelong attraction to the sea led him to create themes based on the marine world, for which reason, his first solo exposition, in the Gala Art exhibition hall, was inspired by marine birds. In his second personal showing in the Gallery Barranco, there was a change. In this one, he broached the theme of warriors and mythical battles. In the third showing, which took place in Praxis Gallery, titled Baroque Concert, there could be seen in his works a notable connotation with surrealism such that his images seemed to emanate from the twilight shadows of a dream. His fourth one-man show took place in the municipality of Valparaiso, Chile. Regarding that show, Hugo Garcia, writing for the newspaper el Mercurio, wrote: He possesses a great technical dominance over composition and color; his bestiaries and depictions of myth become, each time, more surrealistic, but also more abstract, moving to reinforce the ontological value of his work.